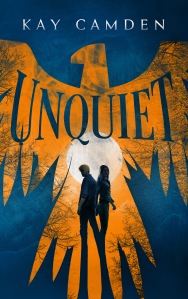 UNQUIET is now available on Amazon! The Kindle version is live now. Paperback version will be live soon. Edit: Paperback is here!

The Unquiet Series is an urban fantasy trilogy with a wholesome small-town hero, a mysterious anti-heroine, and a world of unquiet spirits, razor-toothed demons, and thunderbirds.

Get the Kindle version now for a release price of only $2.99! And please remember to rate, review, and spread the word!

Unquiet spirits. A gathering underground war. And a love that complicates everything.

In Mick’s quiet Missouri town, strangers stand out—especially mysterious women who vandalize cars in front of the local grocery store. It’s strange, but none of Mick’s business … until he notices the woman’s busted lip. The right thing to do is offer her a ride and a place to hide out—which is how he ends up with her knife against his throat in his own apartment.

Waapikoona has nearly reached her quota of bodies to raise her sister from the dead. When it’s this easy to take her next valuable soul, she can’t say no. But she stalls killing Mick, sensing another regret she’ll have to carry in her already dark world.

Old bones are stirring underground, changing Mick. Waapikoona has crossed the circle of time, made a pact with a powerful underworld demon, and angered the thunderbirds. Mick can’t escape his new calling: stop Waapikoona and the unquiet she’s dragged into his town.

The Alignment
by Kay Camden

I wrote a prologue for THE ALIGNMENT at some point during my years of querying. It gave a tense opening to the book I hoped would be a better hook. It also introduced Trey from an outsider’s perspective, which I liked, because it set you up with a bit of warning about the guy.

I cut it before the book went to my editor for several reasons:

– it opened the book too much like a thriller (which it isn’t)
– it added another first person point of view (two are enough, three might be confusing)
– it cut Liv from being the first character you meet (she needs to be first)
– nobody likes prologues (get to the story already!)

I still like it though, for that glimpse of Trey through someone’s eyes other than his own and Liv’s. Because we all know they’re both a bit biased. :)

Fun facts: The mess Trey sees in his kitchen in chapter two and cleans up in chapter four is a result of this scene. The gash he gets above his eye in this scene is the one Liv fixes for him when they meet at the clinic in chapter two. (She thinks it’s from the car crash. He knows it’s not.)

Here it is. It’s raw and unedited, so please don’t yell if you find some mistakes. If you haven’t yet read THE ALIGNMENT, what are you waiting for? Buy it!

Prologue of THE ALIGNMENT

As soon as he steps down from his truck, I know today is the day. Yesterday was wrong, and I’m glad I waited. The dirt covering him from head to toe tells of a long day of physical labor. The slump of his shoulders proves it. The brown paper bag doing little to mask the bottle of alcohol he grips by the neck makes me chuckle out loud. Fatigue and alcohol. Today is my lucky day.

He plods into the house, and I move to the backyard to gain a better view. I need that alcohol in his system before I make my move. The more the better. From behind the house, I see the kitchen light blink on. It’s a beacon from his wide-open window, calling me in. We know he’s bold, but I refuse to acknowledge his careless indifference. He must fear us. He has to.

The first glass goes down quickly. To my satisfaction, he fills it again. He’s slower to consume the second glass, but I can be patient. All who came before me must have been missing this key ingredient. Patience. And they are all dead because of it.

The moon rises above the mountains while I wait, reducing my cover of darkness. When every light in the house has been off for a while, I move in. The howl of a nearby wolf cuts the air. I pause. It takes a long time for the stillness to return, but once it does, I continue my approach. The sliding glass door is unlocked. Without a need to pick a lock, this feels like cheating. My fingers graze my gun, but I remember we were taught not to rely on weapons. The old wooden floor in the kitchen remains silent under my careful tread. My eyes dart to a sliver of moonlight reflecting off the blade of a large knife on the counter. I could use his own knife on him. What a story that would be when I return. But it won’t be better than my reward.

The handle of the knife slides into my hand. A shadow crosses my peripheral vision, and I eat the floor without warning. Blood seeps into my mouth. I leap up and twist. He comes at me again. The knife catches him above his eye, but then it’s out of my hand and I’m on the floor again. My head pounds. I don’t even know where I’ve been hit. I roll under the table as it’s thrown sideways. Pulses of pain jar my body with such rapid precision all I can do is curl and protect my head.

My ribs collapse. Shallow breaths aren’t enough, and I swing my elbow into the open air that suddenly surrounds me. I recognize the break in his offense and move, grabbing the handle of a drawer to pull myself upward. Knives scatter at my feet, and I raise my head, swallowing my surprise at the large, calm space between us. We make eye contact in the dim room. He’s big, but not as big as I imagined. With the number he’s killed, you’d think he was a mammoth.

I blink away the clouds rolling into my vision. Light angling through the window settles on his face, reflecting off the dark stream of blood running from the cut above his eye. Other than that, he doesn’t have a scratch on him. Yet I’m working off one lung and struggling to remain standing. He takes a step backward and cocks his head, studying me like the exhausted parent of a mischievous child.

Something sinister drives this guy. Something unbeatable. We are sent as sacrifices, simply to shake him up. Nothing more. With all the training I’ve had, I still walked into this blind. Blind and stupid. Is he really their enemy, or is he one of them? I may not make it back with what they want, but I can make it back alive. And I know he’s not going to let me go without a fight.

My hand goes for my gun, but it’s missing. I snatch the closest knife from the floor and swing my leg at his ankles. He dodges, but it’s enough to open his side to me. I blast upward and jab the knife toward his kidney. The snap of my wrist then my elbow buckle my knees. His arm wraps around my shoulders from behind. His free hand grips my head at the temple. He grumbles something under his breath. When my first vertebra breaks, I know his words are the last I have failed to hear.

It’s still planned for release in the summer of this year.

The free Kindle promotion of THE ALIGNMENT ends today, so if you haven’t grabbed a copy already there’s still time.

THE ALIGNMENT has made it to #15 in the Top 100 Free of the Kindle eBooks > Romance > Fantasy category and #635 Free in Kindle Store. What a thrill!

I plan to do another paperback giveaway on Goodreads soon. Sign up with your email address in the sidebar if you want notification when the Goodreads giveaway begins.

And to all the awesome people who purchased THE ALIGNMENT on Amazon this week, happy reading! I hope you enjoy it!

THE ALIGNMENT will be free on Kindle for the first days of the new year.

Get a copy, read it, tell a friend! Happy New Year!

And check out Indie Author Land which has a list of other free books!

A cataclysmic love story. Mountains, magic, and an assembly line of stealthy killers. A millennium-old spell that thrusts two people into the heart of danger.

THE ALIGNMENT is now available on Amazon in both Kindle and paperback format.

It’s the first book in a new series about two rival families and the people caught between them.

THE ALIGNMENT
Book One

He’s killed three men in the few days she’s known him. Yes, it’s self-defense. But when he tried to kill her, it wasn’t. Her peaceful mountain refuge has been invaded, her inexplicable nausea linked to his physical presence. She’s captive in his house for her “protection,” with a churning stomach, his bad attitude, and no safe way home.

All that changed the night the stars aligned.

Now he’s talking about ancient bloodlines and celestial alignments…and other things she only believes because of what she’s seen him do. He’s heading out for revenge against the family who wronged him, and he needs her help. All she has to do is ingest one homemade dissolving tablet to allow him into her mind—to train her to be just like him.

The answer would be a definite no if she had anything of her world left. If she hadn’t fallen in love with him.

THE ALIGNMENT is a new series that blends modern fantasy, action, and romance.

THE ALIGNMENT, Book One in my series, will release this month. Cover art and formatting are complete. A paperback proof is expected to arrive on Friday. If it passes final inspection, I configure the Kindle version and push the PUBLISH button.

This has been a four-year journey that included countless revisions and a trek through the purgatory of querying the traditional machine. But all that time, and the rejections, have strengthened my writing and my final product. I truly believe this book is better as a result of me going indie and keeping control over my work. I hope readers will agree.

I’ve updated my Fiction page with details about THE ALIGNMENT and the other books in the series. As soon as I push that PUBLISH button, I go straight to work on Book Two.

Look for an announcement about THE ALIGNMENT soon!

#bookgiveaway going on thanks to @the.storygraph! Enter for a chance to win a signed paperback today!
Photos cannot capture what it feels like to stand beneath the #redwoods and look up and up and up and up...
What a beautiful interior, thanks to @ampersandbookery! UNCHAINED paperbacks will be available in just a few weeks!
It's a beautiful day to sit outside with an #audiobook! THE CATALYST is here and oh-so-immersive, thanks to such wonderful voice talent! My favorite @amandaberryvo line: "Oh, well, sh*t, you deserve a medal." Favorite @dr_dynomyte line: "Get the f*ck off my porch." ❤️ ❤️ Start this #fantasyseries on #Audible today!
THE OAK AND THE MOON on #Audible today! Narration by the super talented @amandaberryvo who will certainly make us cry! 😭 😭 😀 If you're new to this series, be sure to check out THE ALIGNMENT and THE TWO first!
UNCHAINED editing is complete. Another book—and series!!—finished, and I can't wait to share it. :)