An infant kidnapped by his enemies. A mother plotting an escape. And a favored son torn between family loyalty and forbidden love. The end of an age-old war between two powerful families begins.

THE OAK AND THE MOON, the third book in The Alignment Series, is now available on Amazon.

The Alignment is a contemporary fantasy series about two rival families and the people caught between them. If you haven’t read the first book, the Kindle version will be free on Amazon December 2-6. Subscribe to my blog in the right sidebar to receive notice when my books go on sale!

THE OAK AND THE MOON is a bit different from books one and two. It takes place in a different time; it’s separate yet very connected to the story you already know. It serves to answer all the questions you might have about Trey and the Moores, and will hopefully give you reason to forgive the things Trey does in book four.

Thanks so much to my talented team: editor Max Dobson, proofreader Debra Argosy, and the artists at DamonZa.com. I’m a perfectionist and bit neurotic, but they all treat me like my nitpicking and freakouts are 100% normal.

I’m beyond excited to publish this book. I hope you like it. It’s being released at $2.99 for the incredibly patient fans of the series. Price will go up soon, so get it now!

THE OAK AND THE MOON
Book Three of The Alignment Series

Sloane Bevan and two-week-old Trey are kidnapped by strangers who speak her rare language and know her family’s secrets. She suspects these men are the ones who murdered her husband nine months ago. Now it’s her son they want, to raise as one of them. To keep under their control.

Imprisoned in the Moores’ opulent estate, Sloane cultivates a plan using her family’s ancient magic right under her captors’ careful watch. Escape is one thing. Ensuring the Moores won’t target her family again is another.

What she doesn’t count on is a battle against the Moore brothers: one after her life, one after her sanity, one after her sympathy, and one after her heart. All while her son is being honed into a vicious killer, and it’s up to her to plant the seeds that will one day reverse the evil now growing inside him. 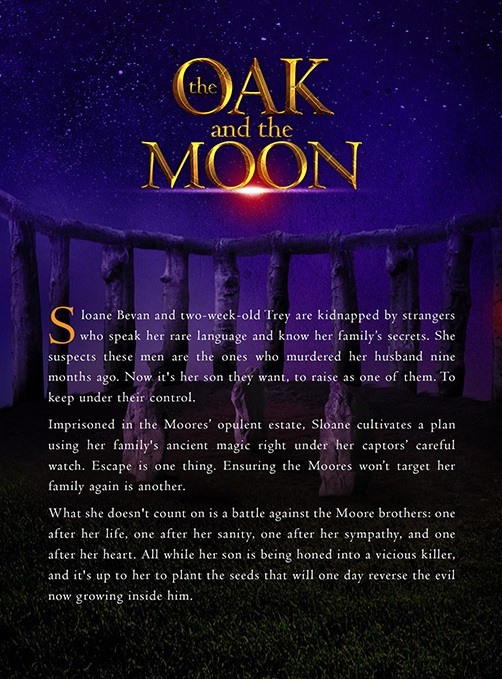 5 thoughts on “THE OAK AND THE MOON is Here”

Baby mint plants growing strong! #mintplants #seedlings #gardening #containergardening
Love to chill in the sunroom on a spring evening with this lovely lantern as the only light. #springnights #lantern #sopeaceful #quiet #amwriting
Splurged on some new pots for the front porch this year. Can't stop admiring them. 😍
Baby mint plants on my kitchen windowsill. #yayspring #mintplants #seedlings
Hiking in #beautifultennessee leaves me too exhausted to get any writing done! I don't know why I bother bringing a laptop on road trips. 🤣 #southcumberlandstatepark #stonedoor #stonedoortrail #bigcreekrimtrail
Finally! Snow! #snowday #missouri #cattledogmix #cattledog #muttsofinstagram #snowdog